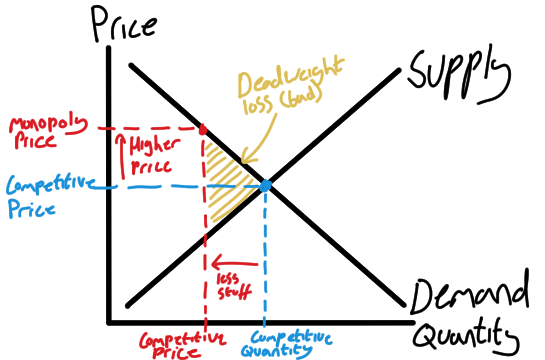 A useful starting point for competition law is a basic understanding of markets. You probably know the supply and demand graph, and it's worth keeping in mind for this bit.

Some things to note are that:

When market forces change (for example, if a monopoly does something anti-competitive) people that were satisfied can no longer be satisfied. This is known as dead-weight loss. When this happens, a monopolist does less and makes more money.

Market power is the ability to contrive scarcity of outcomes. Enough of this is considered a monopoly. Most institutions have some degree of market power.

Makes it so you can't agree to do anti-competitive things (i.e. collusion). This is covered by Article 101 on the Treaty of the Functioning of the EU (TFEU).

When an undertaking has so much market power it is able to exclude competitors from entering the market, and exploit its position in the market. No other party is needed. This conduct is covered by Article 102 TFEU.

Predatory pricing is an example of unilateral abuse. This is where an established undertaking with market dominance can lower its prices to the point that competitors can no longer compete, and later raise its prices after competitors have left the market.

Competition laws contains powers to investigate mergers between firms, if that merger would give rise to an increase market power. Needs to have an ex-ante arrangement prior to the deal, as mergers are really hard to undo after the fact. This is covered by the European Merger Regulation

Enforcement is primarily handled by the European Commission. Undertakings can be fined up to 10% of their annual turnover for breaches of competition law. Decisions can be appealed to the European Court of Justice.

There are also national competition authorities which can enforce EU competition laws. They can also fine up to 10% of an undertaking's yearly turnover. You can also get disqualified as a company director, or be imprisoned.

Private enforcement (by parties harmed by anti-competitive practices) through national courts is also a possibility.

Back to the Index | Next Chapter